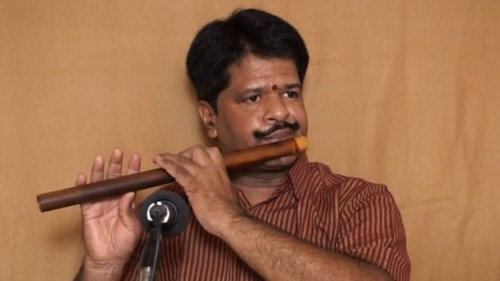 (Volume 7) Learn Carnatic Flute – A course of Varnams in Various Raagas of Adi Thaalam
Varṇam is a type of composition in the Carnatic music system consisting of short metric pieces which encapsulate the main features (patterns of notes) of a raga.Varnams capture the raga bhavam, ranjaka prayogas visesha sancharas, etc. Dhatu and Janta prayogas (phrase usage) are usually part of a Varnam. Understanding of these aspects is key to developing manodharma sangeetham (ie., improvisation aspects of Carnatic music such as raga aalapana, swara kalpana, neraval etc)

Known for their complex structure, varnams are a fundamental form in Carnatic music.All varnams consist of lyrics,as well as swara passages, including a pallavi, an anupallavi, muktaayi swaras, a charanam, and chittaswaras. There are different types of varnams, such as taana varnam, pada varnam, daru varnam and ragamalika varnam. They also come different taalams (beat cycles). Though the most popular varnams are in Aadi and Ata taalas, there are a number of varnams in other talas as well (e.g., jampa tala, triputa tala, matya talam, roopaka talam, etc).

Considered as probably the most complex form in Carnatic music, varnams play a significant role in Carnatic music. A varnam is traditionally performed as an opening item by musicians in Carnatic music concerts to act as warm-up for the musicians,or as a centre main piece in Bharatanatyam dance concerts. As a foundation to Carnatic music,varnams are also practised as vocal exercises by performers of Carnatic music, to help develop voice culture, and maintain proper pitch and control of rhythm. The melodic patterns in a varnam are considered to be characteristic patterns of a particular raga.

Named for its tanam-like rhythmic qualities, tana varnams only have lyrics for the pallavi, anupallavi and charanam.

With rhythmic elements like a padam, pada varnams are generally sung to accompany South Indian classical dance, including bharatanatyam.Unlike the tana varnam which only has lyrics for the pallavi, anupallavi and charanam and swaras for the rest of the sections a pada varnam also have lyrics that correspond to the muktaayi and chitta swaras of the varnam, so generally, pada varnams contain more lyrical content than a tana varnam.The swaras in this type of varnam are suitable for intricate footwork.Padajathi varnams are simply pada varnams that also contain jatis in it, making it again more suitable for South Indian classical dance.

Contents of a varnam

The name "varnam" (meaning "letter") was likely given to this form of song due to the prevalence of swara letters in this type of composition.

Lyrical content of varnams are commonly either devotional or amorous.

The varnam is subdivided into several sections:

Pallavi: The first section of the Varnam, sung with lyrics or sahitya.

Anupallavi: A sort of recapitulation, sung with lyrics or sahitya also.

Chitta Swara or Ettugadda Swaram: Sung completely with syllables. In a Pada varnam, there are lyrics which correspond to the Charanam swaras. The swaras occur in several groups or stanzas.

Anubandham: epilogue to the Varnam. Some varnams have this additional part that follows the charanam and chitta(Ettugadda) swaras, that is sung with lyrics or sahitya thus leading back to the muktaayi(Chitta) swara or the first pallavi line itself. It is found more often with very old Varnams and it is less prevalent in the newer varnams. In modern times, some old varnams are even sung partially, by omitting the anubandham part. The most classical example of this is the Viribhoni varnam in Bhairavi, which is sung after omitting one of its chitta swaras and the anubandham.

Varnams are traditionally rendered in a format that consists of Pallavi, Anupallavi and Chitta Swaram (Mukthayi Swaram) being sung first in a relatively slow pace and repeated immediately after in double the speed. The rest of the composition (Charanam onwards) is sung in a ‘madhyama kala’ or approximately 1.5 times the speed used at the start. Each swara passage is sung, followed by the lyrics of the charanam. Some performers do not follow this though, preferring to sing the entire composition in ‘madhyama kala’ or relatively fast pace.

"Valachi Vacchi" in Navaraagamalika in Telugu (9 ragas, similar to Ragamalika which literally translates to a garland of ragams

The Arabhi ragam varnam is supposed to be the only longest piece with jantai and dhattu prayogas.

The "Mathe Malayadhwaja" by Harikesanalloor Mutthiah Bhasgavatar is a unique Varnam because the Chitta swara has two different types of saahitya arranged according to it. The first is a rhythmic poetry describing the king and has the Raaja mudra and the second is a lilting Solkattu swara which is very nicely embodied in expression by bharatanatyam dancers
Who this course is for: